For project two our team of Shay Mitchell, Jaxon Arundell and myself decided to create a track called ‘Forked Tongue’, for a band we had called ‘Big Mono’.

This project required the inclusion of some electronic music elements. As each of us have acoustic instrument backgrounds, this project was to be a new and rewarding experience for us. We began by using Shay’s Roland Juno synth just employing its presets and also recording via MIDI into our DAW with instrument sounds from the Kontact plugin.

After playing our rough track to our colleagues, the overwhelming feedback was that our synth sound was a little too retro. It did sound more like the popular  synth sounds of the 80’s rather than our reference tracks which included The Prodigy and Nine Inch Nails. This certainly didn’t meet the brief we had set ourselves, so Shay and I set about bringing the synth melody into the 21st century by creating our own synth patch.

We began playing with the hardware units but found we were going around in circles having no real idea of what we were doing! Fortunately, we ran into our colleague ‘Doctor Duck’ who has a lot more experience in this area and he directed us to a software plugin (FM8), which is considered by many to be the standard for making FM synthesis patches. We immediately did a ‘YouTube’ tutorial on FM8 Basics, which was not only informative but extremely entertaining. The guy was quite loose in his presentation and had us in stitches at several points of the video. The content however was certainly enough for us to get a grasp of what was required to achieve our goal and we set about creating our new synth sound.

The key elements to the creation of this sound involved playing with settings on the: 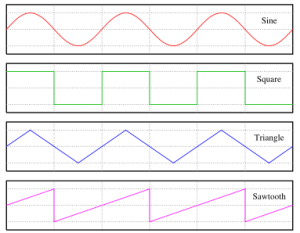 The raw source of the sound; either Sine, Square, Triangle or Sawtooth waves are used as the basis for the oscillators. These wave forms have distinctively different sounds and for our purpose we used a combination of sine wave and sawtooth waves. Our reasoning behind the use of the sawtooth waves is that the particular sound of this wave is quite harsh and we were looking for an industrial type synth sound for our tune. The synths oscillator settings also control the frequency or pitch of the sound, the higher the frequency, which is measured in Hertz (cycles/second), the higher the pitch. We adjusted each oscillator (5 used for this sound), de-tuning some and setting others an octave higher or lower

The filter section of the FM8 allows for the harmonics of the waveforms to be adjusted to your preferences. A sine wave is a single frequency however the other waveforms are a blend of different frequencies which can be blocked or allowed through these filters.

This section of the Fm8 controls the Amplitude and ADSL (Attack, Decay, Sustain and Release), of the sound. We adjusted each oscillators settings for the ADSL parameters until we achieved what we found to be an interesting character for the overall tone.

This was where we really had some fun. By sending the different oscillators into each other down the chain (as you can see in the FM matrix section on the right of fig.1), we were able to create some really interesting sounds and brand new frequencies.

Around the time we had decided we were happy with the sound we had created, Doctor Duck popped his head back into the studio to see how we were going. He also suggested using a feature of the FM8 oscillators we had not noted, the panning nobs. This really created a fuller stereo image for our sound. By adding the Sans Amp PSA1 and Reel Tape Saturation plug ins we achieved an even dirtier more industrial sound. We then re-recorded the melody line into pro tools using the MIDI keyboard and all agreed it was a marked improvement in meeting the brief.