Our world over the past 50 years has experienced a meteoric increase in consumption. Why? We are still the same species that at our core, require the same resources to survive as our ancestors did thousands of years ago. A mystery indeed! 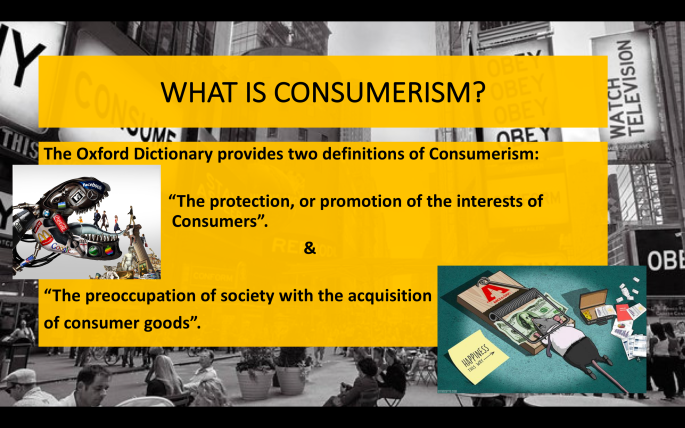 The first definition describes the well-being and protection of rights by consumer groups in keeping advertisers honest, promoting the safety standards of products, ethical packaging and enforcing guarantees. The second definition (and what I will be focusing on today), is “The preoccupation of society with the acquisition of consumer goods”. We will discuss some facts about consumption in our western society, the impacts our excess consumption has on our environment and the burgeoning movements away from mindless consumerism and towards conscious consumerism and some of these alternative belief systems. 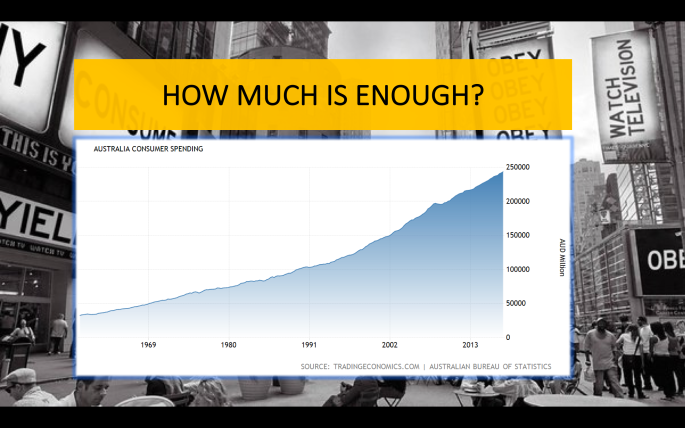 So, how much is enough? Do we as consumers ever reach a point when we have all we need? It appears not! This is a graph depicting Consumer Spending in Australia from the late 50’s through to 2016 generated by the World Bank. As you can see, the trend is undeniable and damning when analyzing our increasing desire to consume. What this graph does not tell us however is that the level of household consumption as a % of our GDP is at 58%, behind the US which is almost 70%!

Western countries like Australia, the US, Canada, the EEC nations and Japan are of course at the forefront of this alarming trend of mindless consumption with some figures placing our 20% of the worlds population as being responsible for over 70% of the worlds resource consumption to feed our insatiable lust for more ‘things’. Can the lifestyles of the consumerist minority be maintained without the destruction of the environment of the many? Simple answer, No? Despite technological advances like clean energy, this rate of consumption by the west is not sustainable and is destroying our earth at an alarming rate. Everything we consume is essentially produced in a factory somewhere and these factories produce more than just CO2 emissions. Some of the chemical byproducts of these manufacturing processes are extremely dangerous to our waterways, soil and of course atmosphere. The mass deforestation for use in agriculture destroys not just the forest, but the resulting erosion destroys our soil quality. Without these forests, our earth is unable to heal itself, but we ignorantly march on towards a future that is looking bleak for our children due to our culture of continual consumption

Being a consumer however is not some form of inherent evil, we are all consumers by default. We consume the necessities of life everyday, oxygen, water, food, and of course we satisfy our need for shelter. This is what I would call ‘passive consumption’ in that if we do not consume these basics for our survival…we perish. My focus today is on ‘Active consumption’ brought about by the advertising of multinational corporations and how they consistently manipulate the fears and insecurities of their target market. To understand how advertisers utilise psychological, cultural and social methodologies to increase our likelihood of purchasing their product (whether we need it or not), lets have a look at some of the reasons why we buy. 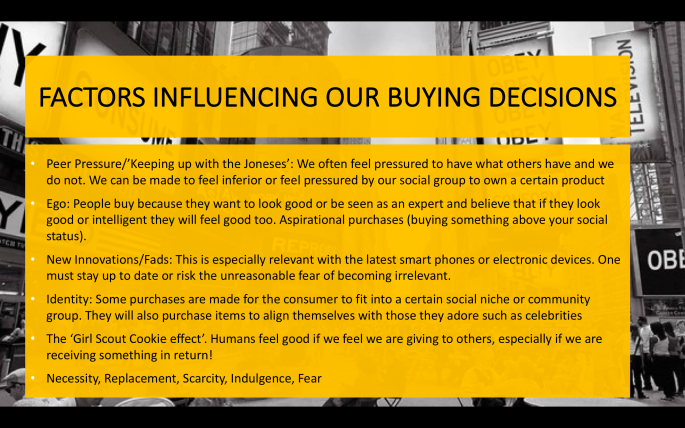 The buying drivers list is obviously longer, but I find these the most interesting and easily employed by marketers in the hunt for your dollar.

The rise of the internet, the race towards Globalisation and deregulation of many industries has certainly changed the way advertisers are able to reach their targets. Large corporations and their in-house advertising agencies have long used psychology to study what makes the consumer tick and what emotions are likely to encourage them to purchase. They research sociology to determine how individuals will respond when marketed to as part of a specific collective. How the opinions of their peers, their family, workmates and social groups influences their buying decisions. Cultural anthropology or the study of belief systems, values and cultural customs to predict drivers for consumer purchasing is now also widely employed.  The use of these techniques in themselves I don’t view as unethical and they actually make prudent business sense, as knowing your customer has always been key to getting the most out of your marketing strategies. But what about some of the more sinister accusations aimed at the corporations such as planned obsolescence, Big data and Facebook listening to your conversations via your phone or computers microphone to tailor advertisements to your probable consumption needs? 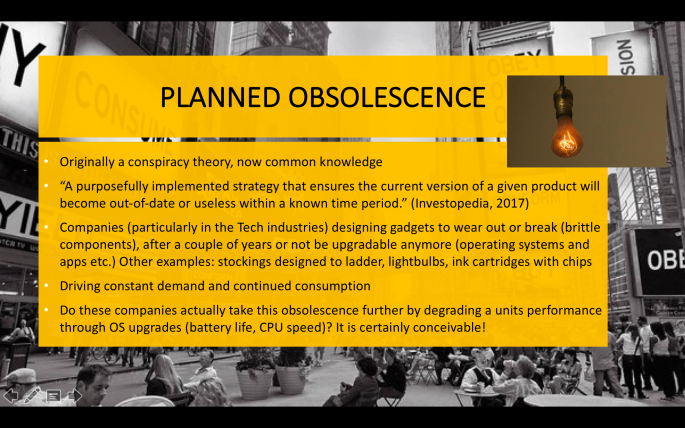 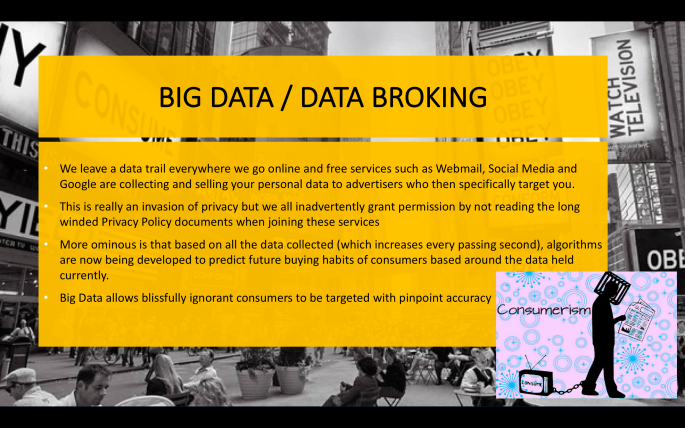 Whether these accusations are true or not, it is clear that we have entered a new age of consumerism fueled by the new mass media and the use of our personal data to design advertising to infiltrate our everyday lives with laser precision. Compulsive buying online or in retail outlets is a form of addiction and for many affected not one they acknowledge. The constant barrage of advertising assaulting us via mass media is relentless and it could even be argued that mass media is driven by this advertising. 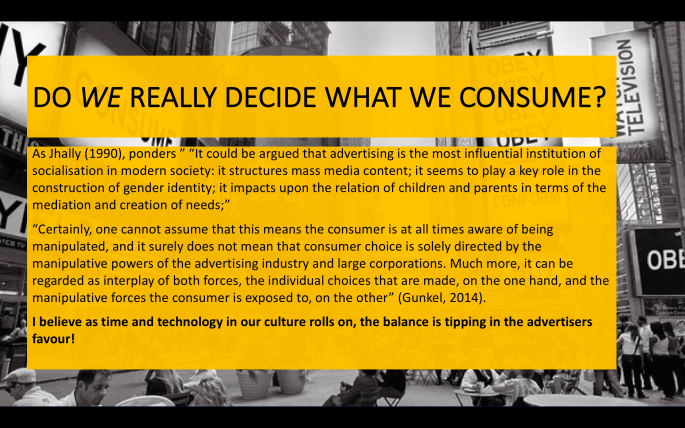 So, is there a way to circumvent the damaging aspects of consumerism? Some believe so, and the three movements I will touch upon are growing in popularity amongst the general population. 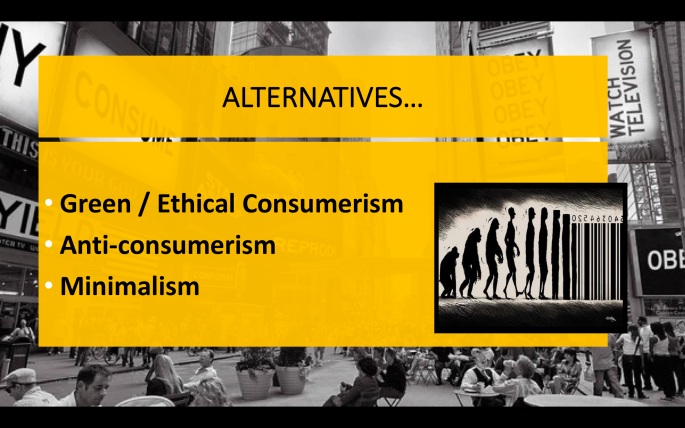 Green / Ethical Consumerism: This movements key premise is to only consume items that are sustainably or ethically produced, are biodegradable and products whose manufacturers do not support oppressive regimes or invest in questionable ventures. The idea is that by doing a little bit every day, we will ensure the planets ecosystems are being impacted less. I doubt that this approach (whilst admirable), will have any real impact on the juggernaut of modern consumerism. If it does, it will be a very slow process as voting with one’s individual dollars by buying local or wearing hemp clothes has little effect unless the ideology is taken up en masse.

Anti-consumerism: In addition to buying only green or ethically produced goods, anti-consumerism encourages its converted to ‘tread more lightly’ on the earth. It arose out of environmental and animal cruelty activist groups and has gained a firm foothold in the minds of these groups and also those generally opposed to globalization and the power of the capitalist elite. It also has roots in religious ideologies where greed is considered a sin against God. Anti-consumerism at its core, involves rationalizing consumption and thinking consciously about what is consumed, denying the automatic ritual of buying anything one desires.

Minimalism: This is a movement with legs! Minimalism’s fundamental doctrine is that things don’t buy happiness, and that the more we have, the more we want and the more stressed we become. We have all felt that freedom of going camping, no mobile service and just the bare essentials, or checking into a simple clean hotel room with none of our personal clutter around us. Emancipating! I believe that our civilization will begin to consciously converge upon the concept of minimalism and ‘de-cluttering’ our lives to become more liberated and less stressed. By removing non essential items from our lives and shifting our focus from accumulating possessions, we create space in our lives (and minds), for the pursuits that really matter to us: strong loving relationships, time alone, creative endeavors and being absorbed and present in the moment. We as humans desire peace and space and our world has become so cluttered and busy that these conditions often seem so elusive.

Downsizing also has clear economic benefits and as many of us have fallen victim to our perpetual focus on consumption, personal debt levels have skyrocketed resulting in increased stress and anxiety. Many, who have in the past lived beyond their means (driven by our materialistic natures), have decided to throw off the yoke of crushing debt and money saved (as a society), is at an all time high. Continued uncertainty in global markets has been a key driver here and I believe will soon result in people paying much more attention to what they actually ‘need’ to live, rather than what they are ‘told’ they must have.

As the world becomes closer through technology, more of us are also becoming enlightened as to the environmental damage our consumption creates and the simplification of our personal lives goes a long way to rectifying the damage done to our world. Simplification offers more time, more money, less interruptions and therefore less stress and anxiety. I believe a more minimalist life will be a widespread future trend for these reasons.

Below is a short video of two guys at the forefront of the minimalism movement. They have sold more than 20 million copies of their book based on the premise that less is more and still remaining a consumer, but not of things, of meaningful experiences. People are starting to realise that they are constantly being sold the next shiny object and none of these items bring contentment. The search for happiness through alternate methodologies other than consumption is on, in earnest.

I believe however that the fatal flaw in these alternatives is that the worlds population is growing exponentially and a growing population means more jobs are needed. With more jobs needed, more consumption is required to create employment and fuel our economy. And so…. the Capitalistic cycle continues, so what is the answer?

Let me know if you ever figure it out! One thought on “Consumerism: How much is enough?”