This blog will explore ‘loudness normalisation’ in broadcasting over different media platforms and the new standards being adopted by the 193 member states of the ‘International Telecommunications Union‘, the architect of these standardisation recommendations.

In a world where technology is bringing all nations closer together and media is being shared across continents en masse, the need for standardisation becomes a practical and logical consideration. This has been compounded by the rise of streaming as a leading agent for the delivery of media. We all remember the days where having the remote safely within reach was a perquisite when watching TV, as the advertisements would come blaring through at a detestable volume much louder than the program itself. The drive by the industry was to remove this disparity and be able to measure, quantify and control loudness levels to ensure consistency in the audio signal.

Each country or region has its own loudness standards; Europe has EBU R128 (-23 LUFS), the US has ATSC A/85 (-24 LUFS), Japan the TR-B32 (-24 LUFS) and Australia has OP59 (-24 LUFS), however the ITU standard (ITU BS.1770), is by far the most important as most of these regional standards are based upon it. When it comes to music, the major streaming providers like Apple, Spotify, YouTube and now Tidal have effectively sounded the death knell for the ‘Loudness Wars’ which has been raging in the industry for the past 30 years. They have achieved this by applying their own platform specific volume normalisation to anything being streamed so that the listener is not constantly reaching for the volume knob in between tracks. At the time of writing however their are no loudness normalisation algorithms applied to content on Soundcloud, so the loudness wars continue in earnest on that platform. Below are the individual volume normalisation levels for each streaming service:

So what are LUFS and how were these levels determined?

The acronym LUFS stands for ‘Loudness Units Referenced to Digital Full Scale’. Essentially, one LUF is equal to one dB so increasing/decreasing your dB level with a fader will have the exact effect on your LUF level. The complex set of algorithms that determine the LUFS level work by analysing the audio section in its entirety and finding its average loudness which is then expressed as the LUFS of the piece.  Pre 2011, another metric was also used in conjunction with LUFS, namely LKFS (Loudness, K-Weighted, referenced to digital Full Scale), but it was identified in the ITU’s paper of 2011 ‘Loudness normalisation and permitted maximum level of audio signals’ that long quiet sections in an audio track were adversely affecting the averages. The solution was to apply a gate that would prevent the algorithms from including these quiet sections (below a threshold of -70 LUFS), from their averaging calculations. Now, (to compound any confusion), the two measurements are essentially the same thing!

The levels of ‘perceived loudness’ are acoustically subjective to the human ear (unlike actual sound pressure), and the ITU commissioned extensive real world listening tests on thousands of subjects to arrive at their recommended LUFS level. This was achieved by playing the subjects reference audio at the normal TV playback volume (60dBA), and ensuring that their Leq (R2LB), loudness algorithm (measuring the energy of a section of audio in its entirety), demonstrated authentic continuity with the ‘real world’ results. This measurement is superior to RMS monitoring as RMS only measures the signals voltage and does not factor the psychoacoustic elements of perceived loudness into the equation. 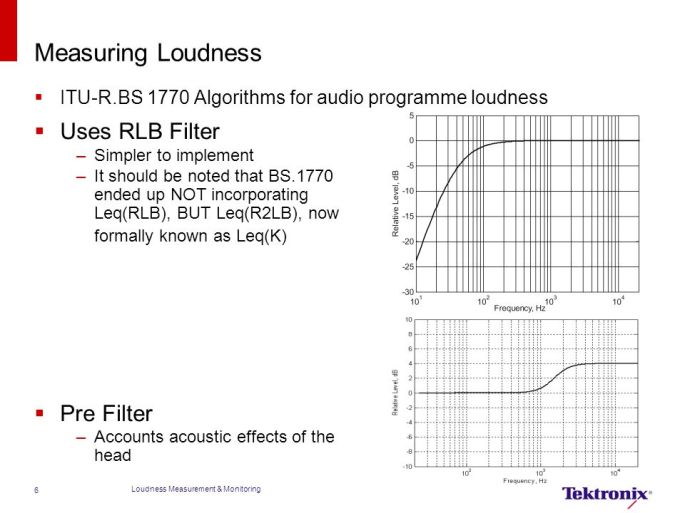 How do we ensure our audio meets the required specifications?

It is important when uploading music or audio of any type that it meets the requirements of the specific platform. If you supply audio heavily compressed and limited at a level that is too loud, the platform will automatically turn it down to ensure the LUFS level complies with their specifications. This search for the loudest outcome can actually result in your product losing valuable head room that could have been used to emphasise transients and increase the dynamic persona of your creation.

This is because the LUFS measurement is using the ‘integrated average’ of the complete audio file, not bringing down the whole asset because it has hit a true peak outside the recommendation. A disastrous result, as a dynamically rich sonic delivery (dependent on the genre), is really the primary goal of a great engineer (although the customer is always right).

I have been using Avids Pro Limiter plug in which complies with ITU BS.1770 and includes a metering window and histogram that monitors and reports the following:

With the metering section built into the limiter, arriving at the desired LUFS level becomes easier than using multiple plug ins, as everything required is compactly and clearly displayed. It is imperative that this plugin is inserted after all other channels in the DAW so that it is measuring all audio in the mix. The crucial knobs ‘threshold’ and ‘ceiling’ are used to reach the desired LUFS level which will depend on where your production is being delivered. For music sent to be mastered for CD (which is steadily on the decline), there is some conjecture about what the desired LUFS should be with between -8 and -12 seeming to be the consensus.

Loudness standards and loudness normalisation appear here to stay. With the steady demise of CD sales, the control has been handed over to the streaming corporations and broadcasters with the ITU’s recommendations being adopted as law by many of the member nations. The headroom margin afforded by the streaming platforms does allow  the engineer/masterer room to accentuate dynamics and add punch and personality to their delivery and will no doubt in time change the long held mantra that heavily compressed and limited, louder mixes are better. The LUFS measurement is the integrated average over the duration of the track, so dynamically accentuating certain parts of the mix increases your creative license to a degree.

It is to be remembered that normalisation does not change the quality of your mixes, it just changes the volume. All the fundamental components like finding space in the mix for each element and getting the balance correct will not change, but as audio engineers we must be educated and aware of the process now in place and discover the best way to use this to our advantage.

One thought on “How loud should it be?”